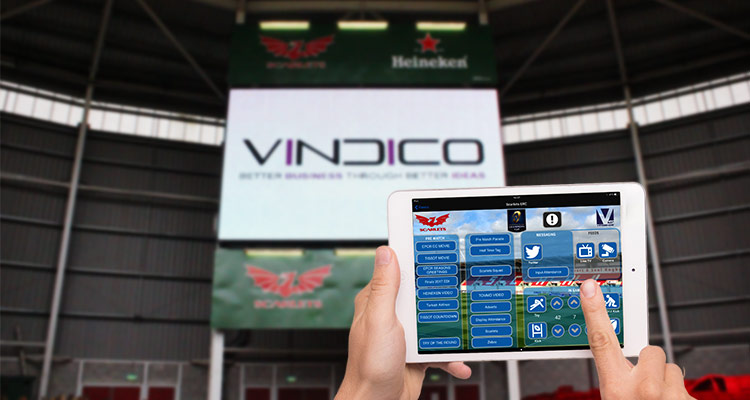 In 2008, the newly built Parc Y Scarlets became the Scarlets and Llanelli RFC’s new home. The state-of-the art stadium has become synonymous with cutting-edge technology – and we’re proud to be the people behind the design, build and management of the stadium’s entire tech infrastructure.

In fact, we’re so committed to its success that our team are there on every match day to make sure that Parc Y Scarlets’ tech operations are delivered seamlessly.

So, when disaster struck, we knew exactly how to tackle it.

A key feature of the new stadium was a large pitch-side screen.

It looked great, but making sure it delivered seamlessly took a lot of time and effort. The system needed two people, using two different controllers, to manage the game’s content and output. On top that, it also had some reliability issues that made us question its efficiency.

It was an uphill struggle.

The screen’s controller system broke down beyond repair – and some serious #ThinkPurple action was needed.

Rather than rebuild a mirror of what was there before, we sat down with (then) General Manager David Stock to understand exactly what he wanted to achieve.

Armed with a blank pieces of paper and plenty of ideas, we were sure this would be a valuable meeting.

What did we get?

Although basic, the diagram represented was a man holding an iPad at the pitch’s halfway line. And it really got us thinking.

We left the meeting and immediately got to work by asking lots of questions. LOTS!

But we’ve worked with the Scarlets for 20 years – and they trusted that we would deliver.

We wanted to understand everything from broadcasters’ requirements and pre-match advertising to social media feed integration and what in-game action was needed – such as TMO (which is rugby talk for “give me another look, please”).

This opened up even more questions, posed a ton of considerations and gave us a heap of research to do – and the pressure was on. We had just six weeks to develop and build the prototype that needed to be ready for the first game of the season.

It wasn’t pretty, but the new product was faultless, and it delivered flawlessly.

We called it: Vindishow (see what we did there?).

This cutting-edge product used the latest technology to take in live video direct from the broadcasters – upgrading it from SD to HD – to deliver instant control to the Scarlets via one simple and intuitive interface.

As the season progressed, we also added iPad control and social media integration.

Vindishow has now been running for six seasons at Parc Y Scarlets, and we
continue to evolve the product to this very day.

Gone are the days where two panicked people, synchronising watches and praying to the AV Gods that the system wouldn’t crash as Leigh Halfpenny crossed the try line.

Now, it’s as simple as a tap on an iPad.

“I had only been working at the Scarlets for a short while as General Manager, but the existing pain of the big screen system was well-known. It stressed the staff, and upset sponsors and broadcasters.

“I had the picture of the perfect system in my head, but I didn’t actually think it’s what I’d get! When I was first handed the iPad, and I pressed a few buttons, I think I smiled all day.”

Click here to find out more about the latest evolution of Vindishow, see who currently uses it, and discover how it can help your business.